Let me start with a rundown of the last few years of racing up at Wildflower:

Why this all matters is because for a lot of west coast triathletes (and for many veteran triathletes in general), racing the first weekend in May has meant a trip to Paso Robles, California, and then the 30 mile drive to Lake San Antonio, the home of the Wildflower Triathlon for 35 years and counting. But as you can see things have not been going to well lately and another year without a race at Lake San Antonio was shaping up. This is where my friends and local Santa Barbara Triathlon Club triathletes and Goleta Beach Triathlon (GBT) organizers, Jerrett McFarland and Kirstin Candy-McFarland come in.

Jerrett, as well as many Santa Barbarans, view WF as one of our “local” races, so the talk was about doing a faux WF race or training day onsite this year. Well Jerrett, who started the GBT nine years ago, did us one better. He reached out to the Monterrey County Department of Parks & Recreation to see about putting on a race up there on the first weekend in May. Jerrett, ever respectful of Terry Davis and the long history of the race, never intended to replace Motiv and replicate the WF experience; he and Kirstin have only ever had the athletes in mind since they started putting on triathlons. The reason to host an event was, as Jerrett said, we’re racers and we like racing up there. Jerrett and the County worked out an agreement and the Lake San Antonio Triathlon weekend was born.

The plan was to do a full set of races, LC, Olympic, Sprint, Duathlon, Aquabike, 5k and 10k runs, but in a minimalist way. No big transport trucks hauling in a grandstand and such, no vendors, no sponsors, no help from the hundreds of Cal Poly students doing community service hours, etc. The iconic LC bike ride would become two laps on the standard Olympic distance course, meaning two times up Lynch Road hill, while the run would consist of sprint distance tri laps along the lake front drive; meaning 1 lap for the sprint race, 2 laps for the Olympic, and 4 for the LC runners.

Does this all add up to exactly 56 miles on the LC bike and “almost 13.1” on the run, no, but it does involve a lot less cost when you decrease the footprint of the course. And is it something you can put together quickly and easily, yes, definitely a plus. You don’t have to involve the CHP at as many intersections, you need a lot less volunteers, and you simplify the logistics of having to transport supplies and equipment to support cyclists and runners in and around the park. With a stripped down plan all set to go, registration was open for the new San Antonio Lake triathlon, and once again the online folks went at it. 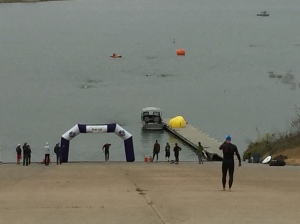 It seems that some things are just too good to be true, with some people hating the idea of “replacing” WF with something so different, afraid that it could replace the real WF tri in the future, while others thought it was some kind of fake scam to make money and not host a race weekend at all. Well as most people realize or should know, putting on a triathlon is NOT a way to make money, but still the stigma remained. Pre-race registration numbers were low, but the show must go on.

So to those folks that thought all these things, and I can see where there was some room for doubt, and who didn’t sign up to race, you missed one heck of a good time. The numbers probably weren’t what was hoped for, instead of hundreds to thousands of athletes showing up, only 100+ individuals signed up to join the fun.

As part of the group of Santa Barbara triathletes and friends that helped Jerrett and Kirstin pull this all together, we all saw firsthand that every person that finished their race, LC, Olympic, sprint, etc., were about as happy as any group of triathletes we’ve ever seen. Some had never raced WF before so we tried to explain to them what it normally looks like and they couldn’t believe it. Other veterans of the race, and one man who has raced all but one WF I believe, said it was the most chill race, the best vibe, harkening back to the early days of the race in the 80’s and early 90’s, that they loved it.

Which brings me to the title of this blog, Wildflower Unplugged. Back in 1989 MTV hosted a new show called MTV Unplugged, where rock bands would leave their electric instruments behind and “unplug”, stripping down their hit songs to the bare minimum. Many artists did well in this new format, Eric Clapton’s Unplugged album comes to mind, and for me I see an opportunity for a change to how we views triathlons and what we as racers actually need. The Lake San Antonio Tri had a safe and well-marked course, it was well-staffed, it had finisher medals (well actually that box got left behind during packing, so “technically” they didn’t give out finisher medals that day), and a very simple awards ceremony; basically if you finished you got something!

I’ll close with three thoughts about this race.

First, most people are hoping that Motiv and the WF Festival weekend returns next year, and I too would like to compete up there against all the athletes in my age group. And I imagine that if and when it returns that it will be run just like it was back in 2018, as that is what the festival has become.

Second, my experience these past 2-3 years, having done more independent races, run by hometown race directors, without a lot of extra pomp and circumstance, provide what I’m looking for in my racing adventures at this point in my career. I’ll admit that since I’ve done a lot of races that I likely have a different point of view from a newbie, so I’ll leave it up to everyone to decide for themselves on this.

Finally, I’m not saying that all races should be stripped down to their bare essentials, as I’m sure a lot of people like all the hoopla and fanfare, etc. But appreciate that all those “extra” items, non-essential to providing for a safe course for the athletes to compete on, cost something, and we pay for it in our entry fees. What if you had an option for a race t-shirt, or not, and could save $10? Do we always have to have a finisher’s medal or podium ceremony, or would just finishing and seeing the results knowing you’ve won, podiumed, or done well suffice?

Do I think that WF will return to the layout that I first experienced back in 1995, when you could drive down to the start and park in the lower lot (now the site of the transition area), and set up your bike in the upper lot (now the finish line plus vendors), heck no. Companies that put on races do so for their own profit, while making sure to put on a safe and fun race for the competitors. WF has continued to grow to fill the park on the race weekend, but what we saw this year was refreshing and one can only hope that maybe it could be scaled back just a little bit to bring back some more of the old chill vibe.

I doubt that will happen, and those of us that were there this year can enjoy the one time memory. In the end I think we all have to thank Jerrett and Kirstin for all their hard work and energy that they put into this year’s event, as well as the very hard working group of volunteers that helped pull it together. And of course, the 100+ athletes that raced this year, thanks for coming out and sharing in the fun too, a chill day at the lake, triathlon unplugged.