Getting old is a simple fact of life, yet each generation tries to postpone its more negative effects as long as possible. It’s a well-known fact that some level of exercise as we age is beneficial, so in a sport where 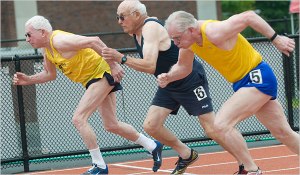 every five years we get to “age-up” and become the young kids in the age group again, we keep pushing the boundaries on how long we can keep training and racing. Anyone reading this that is say under 40 years old has probably not yet felt the effects of aging on their performance, versus just say inactivity, while those over 40 have probably realized that they’re no spring chickens anymore and we have to deal with our body’s slow decline. Unfortunately as George Bernard Shaw once said, “Youth is wasted on the young.”, so we just have to figure out how to work around the aging process.

It’s not just the physical issues that we have to deal with as we age, but also the mental issues. The saying you’re only as old as you feel lets you believe that all you have to do is imagine being young and you can continue to feel and act that way, while the truth is your mind is also struggling to deal with the bodies aging process. I’ll save the physical side for another time, so for now how does our brain deal with our body’s inability to perform at the same level we’re used to, declining ever so slightly year after year?

As the physical effects of aging take hold, our maximum heart rate dropping about one beat per year from age 40 on, our cells taking longer to regenerate, and our bodies taking longer to recover from repeated hard efforts, our minds, trained from years of going harder and longer, keep wanting to push our bodies forward at the same pace. At some point our brains realize there’s a gap between what it thinks we should be able to do and what in fact we are able to do on any given training or race day.

Or maybe it’s after you run a local 5 or 10k running race, your time not quite what you’re used to seeing, at a similar level of fitness and effort, when reality starts to sink in and your brain says, “I am not as fast as I used to be.” Whack, the first time you actually acknowledge that your days of setting PR’s are behind you. Yet for a while you’re in denial, like you and you alone can be that one person to stave off the effects of aging. Yeah, good luck with that I say!

But that is the issue now isn’t it? How do we, our brain, deal with, learn to accept the fact that our performances will no longer be as fast as they used to be. That’s not to say that we still won’t be good triathletes, finishing in and around the same place in our AG that we normally do, but our times will be slipping and we’ll find ourselves in the following situations:

Now this all sounds perfectly normal, for anyone that has yet to experience this, but for a veteran athlete, one who has been consistent in their training and racing results, this can be a hit to their ego. After all, nobody likes to think that they’re getting old, even if every year we wince a bit when our birthdays approach, we still act like we’re a few years younger, and that’s normal human behavior.

In typical fashion, the changes that affect our body accumulate slowly over time, so we don’t always realize what has happened, the forest from the trees affect. But when we look back in time, at last year’s race times, our fitness test (bike and run AT test) results, or our training schedules, we see the big picture and it is this; we can’t do things we did before, so we have to adapt.

One of the biggest issues you face as you get older is that we don’t recover as quickly from the hard training efforts, but for a while we continue to follow the same hard schedule, while our bodies fight back. Hopefully your mind registers that you need a break before you hurt yourself by trying to do too much when you’re over tired, maybe over-trained, and stop being in denial that it’s your age that’s the issue and not the increase work you’ve taken on, family issues, poor sleep, etc.

If you’re used to following a four-week training block, three build weeks followed by a recovery week, but now you’re finding that you’re not doing quality workouts the last week of the three, it could be time to shift to a three-week training block, two hard and one recovery, to allow your body the time needed to adapt to the work load, while not pushing it over the top. And as we continue to age and train you can shift to a two-week schedule, one hard week and one easy week, and to start reducing the number of very hard workouts we do to minimize the damage. Allowing our bodies time to recover from the hard efforts will also help us mentally, as we don’t dread going out for another workout when we’re not feeling up to it. After a long career of racing, going out to slog through another workout is not something we should be subjecting ourselves too.

There can be a time when we decide that the training and hanging out with our friends is good enough, that we don’t have anything more to prove, that we don’t need to be out there racing, and that’s okay too. Maybe you just need to find another group of like minded people that just want to keep exercising for their health and who don’t feel the need to train to compete, either because they never were competitive or because they have already accepted that it’s time to notch it back and just enjoy being out there training at all.

Maybe that’s the bottom line to all of this, and the way to age gracefully, to learn to accept the inevitable, continue to train and hang out with the younger/faster people, as best you can, while maintaining a healthy level of exercise in our lives, to brighten our outlook on life. If the average 50, 60, or even 70 year old triathlete only compares themselves with all the other triathletes in a race, then yes, it can be tough to realize that you’re no longer competitive with them. But they’re not your competition, only those in your own age-group really matter, and even then, they hardly even matter in the big picture scheme of things.

In the big picture it’s the other non-athletic 50, 60, and 70 year old people that we need to compare ourselves with. With one-third of Americans obese, another third just plain overweight, I think we need to realize that as triathletes, even just triathletes “in training”, we have found a way to extend our health and fitness such that we can continue to be mobile and functional as we continue our journey towards old age.

I hope I never have to struggle getting out of an easy chair by straining to use my arms to pull myself up to stand or even worse, to need one of those chaise lounges that tilts forward and pitches me out. If I keep that image in my head, then running down a group at a track workout or getting dropped by the group on a ride doesn’t sound so bad. You can still meet them after wards for breakfast wearing your bike kit, unlike your non-athletic peers, who wouldn’t even think about wearing Lycra first thing in the morning, and that’s a good thing.

Thanks to my wife Janice for suggesting I write this article and for her editorial comments and critiques.