If you live in an area that has hills to climb, you already know that what goes up must come down. Unfortunately not everyone seems to embrace either aspect of this, struggling to pedal their way up the hills and then uncomfortable on the descents. I guess climbing hills on you bike is either something you love, something you do because you don’t have a choice where you live, something you do to get stronger on the bike or just an unpleasant experience to be avoided. Hopefully it’s one of the first three and not the last one, as riding hills is definitely one way to become a stronger cyclist and if that doesn’t motivate you then there’s not much else anyone can say. But the other part, the coming down side of the hill, and not feeling comfortable on the descents, that’s something I can help you with. 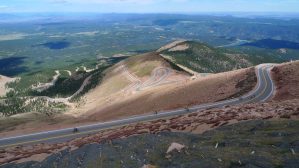 I think everyone enjoys the ride when the road tilts down some, but not everyone necessarily enjoys the really fast downhill’s. What “really fast” means to each of us is different, as I know people that don’t like going much over 30 MPH, while others push and get down as low as they can to reach 40-50 MPH and above.

I have raced a couple of triathlons where my downhill speeds topped 50 MPH and I had to navigate around some corners, which got my full attention. Luckily I happen to also be a motorcyclist, so the actual speed doesn’t seem to bother me as much as the overall feeling of being in complete control at those speeds on a bicycle with skinny little tires and not a whole lot of clothing on to protect me in case something happens. So what can you do when you’re descending to be in as much control as possible through the corners without having to put the brakes on to slow down.

There are four basic things you should be doing while riding downhill and approaching a corner at speed:

Most people understand the first three of these, but many have never heard about counter steering, a term that all motorcyclists should be familiar with, so let me cover all of them.

Looking ahead through the corner means to set your gaze about 1-2 seconds in front of you so that you’re able to react to anything that’s in the road that you may have to avoid, and to smooth out your lines. When you drive in a car on the highway at 60 MPH, travelling 88’ a second, you’re not staring at a spot 10’ in front of your car, you’re looking down the road, else you’d be correcting and re-correcting your driving the whole time. The same is true on your bicycle, so at say 30 MPH, travelling 44’ a sec., about the space between property lines in a normal urban development, you need to be looking that far into the corner to be able to navigate around anything in the road, correct your line as the radius of the turn changes, and apply your brakes as needed.

One thing I do want to point out to avoid while looking ahead is something called target fixation. It occurs when we see something in the road that we want to avoid and after making the adjustment in our course we continue to stare at the thing we tried to avoid, fixating on it, and then more times than not wind up running right into or over it. Our bodies tend to go where we’re looking, so if you see something you want to avoid, adjust your line and then look ahead past the thing for anything else that might be in your path.

The line that you should be taking through the corner should be a sweeping line, starting on the opposite side of the road to the turn and then initiating your turn in to sweep across the lane to hit the apex of the corner and then flow back out to the edge of the road. If you just follow the lines of the road you won’t be able to hold the same speed, you wind up applying the brakes, making a sharper turn, and then you have to reaccelerate out of the corner. Of course you need to pay attention to the traffic on the road in both directions before doing all this, but this is how you do it when the conditions allow you to use more of the road.

Where you should be positioned on the bike as you enter the turn is the opposite pedal down, you basically standing on the pedal, keeping your weight to the outside while you initiate the turn with the handlebars, looking through the turn to create a nice graceful arc. Some people like to move their head and shoulders to the inside of the turn to see better, away from the center line, so this is something you can experiment with to see if that helps you to see the line better and to focus your weight better on the bike.

The last thing to consider, counter steering the bike is a simple concept and one that you’re actually applying whether you know it or not. Some people say that they’re using “body English” to maneuver their bike through the corner, which is correct, but it also means that they’re unknowingly using the technique of counter steering while doing so.

The concept is this, to steer a bicycle (actually anything on two wheels) through a corner, unlike a car where you turn the wheel to the left to make a left turn, you actually push the handlebar away on the left (turning the handlebar to the right “counter” to what you think), which changes the geometry of the bikes steering, causing it to lean into the corner in the direction of the push. Got that? To turn left you push the handlebar forward with your left hand, the bike leans left, and you go through the corner.

Don’t believe me? Then try this simple experiment to prove it to yourself. Go to the top of a not very steep and straight hill and start heading down. While controlling your speed push the handlebar out in one direction and then the other and see which way the bike turns. With practice you’ll be able to control how fast and how far the bike leans (and therefore turns) in either direction. Then go to a flat section of road and approach a turn and use this new found knowledge to initiate the turn into the corner. For a right hand turn, push the handlebar out to the right, look through the corner and viola, you’re there.

The great thing about counter steering, and having the knowledge of how to apply it, is that it quickens the steering response of the bike, greatly improving your ability to avoid obstacles in the road, whether you’re going downhill or not. With a little practice this technique will become second nature and you will feel more confident moving the back around and through corners, potholes, and whatever nature can throw in front of you.

Now that you know what you should be thinking about as you come down a steep hill, try practicing each of these pieces one at a time until you become comfortable looking further ahead in the corner than you’re used to, arcing gracefully through a turn without braking versus weaving around under braking, and feeling in control of bike when you approach each corner and initiate your turn-in while counter steering.

If feeling more confident on the descents makes you a happier rider in the hills, maybe you’ll head out and do more of them and gradually become a stronger and faster rider? Who knew that being more comfortable riding your bike downhill could make you go faster? Hum, I guess I did, so I hope this helps!