The New Year is here and it’s time to get with the program, meaning time to go over those goals you set last year after you reviewed the season’s racing and to start implementing them. I know that concept is foreign to a lot of people, reviewing their performances over the year and then making goals for next year, but let’s pretend we all did that and move on, shall we? 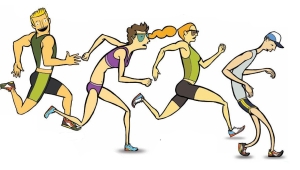 I personally ended my year on a sour note, having broken (smashed the shit out of!), my right big toe, just a week before my last race of the year, one that I had been focusing my run training on. Subsequently I didn’t train for two weeks, didn’t swim for six weeks, and didn’t run for two months. Since then my goal has been to restore my aerobic base, work on my strength training, and sign up for my first race in May. I age up this year so I’m trying to get back to where I was in September with my running. I just started back on the track, albeit slowly, which finally brings me back to the point of this blog, are you a Lazy runner?

I coached our local tri club’s track workout last year and really learned a lot from being on the outside of the group looking in, versus running with a track group like I have for decades. I took my Coaching responsibility seriously and tried to teach people how to be the fastest runners they could be, not to be confused with being the fastest triathlete out for a run! I had them focus on good form, I explained why they needed to learn how to run and maintain their pace, while I pushed each of them and their groups harder and harder through the course of a 20+ week program. The most consistent runners improved their 5k mile pace (which they told me at the start of the program), on average by 30-45 seconds per mile. We’re talking 1.5-2 minutes improvement in their 5k times, overall, in 20 weeks; you gotta like that!

I always look at runners and check out their form, especially the faster runners. Acknowledging that not every fast runner looks exactly like the other fast runners, there are certain good running habits that all good runners have and certain bad running habits that people fall into that need to be corrected. With time and focused running most people can become if not a faster runner, certainly a stronger and more efficient runner. At the end of a triathlon that’s really what you need to be, stronger and more efficient.

The two most common bad running habits I see are over-striding and plodding. Fixing someone that over-strides is easy once they understand that having your foot land too far out in front of your hip is like applying the brakes with every stride. Doing this means that you have to absorb a lot more pounding to your ankles, knees, and hips, decelerating all the time until your body moves over your foot when you can start your push off. Once you shorten your stride a bit, pick up your cadence, and get the feel like you’re floating over the ground versus stuck to it, you never want to over-stride again.

Plodders are another story as most people don’t even know they’re doing it, even when I call them out on it. Plodding is bad because like over-striders, your feet are staying on the ground too long, you constantly have to accelerate/decelerate, and it’s just not pretty. The same lessons that apply to fixing over-striding can help plodders, once they get with the program.

I realize now that I’m also seeing another bad habit that people fall into, Lazy running. I don’t know if anyone else has used this term to describe it, but it’s what I’m going to be calling it. The thing is this “new” problem I’m seeing, the lazy runner, is more mental than physical. A lazy runner doesn’t think they need to run with good form until they have to run fast, so they don’t focus on their form at all until then. They stop leaning forward, they shuffle their feet, and they lower their cadence/number of foot strikes per minute when they’re warming up, during the drills, and while recovering during the set.

The problem I have with this is that they are ingraining bad running form into their muscles and brain, so now their bodies think it’s okay to run this way and when they’re racing and they start to get tired guess which form your body tends to follow, the easier one! At some point during every triathlon run we get tired and if you haven’t concentrated on good form in your training then at this point in the race your body reverts to the lazy form. Your stride shortens, your cadence decreases and you slow down, wondering what happened to your pace. Let me make an analogy to swimming that should make it clearer.

When you swim in the pool do you swim with bad form when warming up and recovering? Or course not, why would you? You focus on swimming with your best form all the time, ingraining that muscle movement into your body and mind? So why would you do it differently when you’re running?

By thinking about your running form (or the changes you’d like to make to your form), when you’re warming up, when you’re doing drills, when you’re running the main part of the run, and even when you’re cooling down, it will eventually become natural and hopefully make you’re a more efficient and stronger runner.

One of our training goals is to build muscular endurance in each sport and to do that we need to train a lot and we need to train with the correct form so that during a race all our muscles, the big ones and just as important the small ones, have been trained in the proper movement patterns so that they don’t fatigue as quickly. To optimize the effect of this training we need to run with good form; we need to not be Lazy runners!

The bottom line here is that having someone point out that you are an over-strider, a plodder, and maybe just a Lazy runner, is just the starting point. You might have to spend some time watching other runners that don’t exhibit the problem to understand what it should look like to run with good form, and you might even need a video of yourself running to compare that image in your brain to. Only then can you begin to make the change to your running style to do away with the problem, focus on it a lot to start, and then over time, as it becomes ingrained in your muscles and brain, revisit the problem from time to time to ensure that you’re not falling back into a bad habit.

Think about this the next time you go out for a run, any run, whether it’s an easy day or a fast day. See if by focusing on your running form right from the start that you don’t find yourself running a little faster, or that your heart rate stays lower at the same pace as you run more relaxed. It might just be small change you have to make before you see a subtle change in your results, so stay with it and hopefully if you give it enough time you will see more improvements and I won’t have to call you out on your Lazy running style.

3 thoughts on “Are You a Lazy Runner?”