This blog topic was suggested by a friend after a recent bike ride. He started the day getting ready to head out for a bike ride up a local hill here in Santa Barbara, San Marcos Pass Road, a.k.a. The Old Pass, 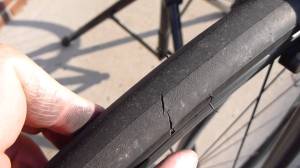 Old San Marcos, or OSM. He wondered about the condition of his bikes tires, whether he should replace them as they had a few nicks and would they be good enough for one more fast downhill ride. I’ve had the same question in my head on a 40+ MPH downhill on more than one occasion, when did I last check the condition of my tires?

Triathletes have a lot of gear to cover all three sports and some of those items do in fact regularly wear out, so when should we replace the things that wear out and what are they? Here’s my attempt to cover the basic items, not including actually replacing say a whole bicycle and all our cycling and racing kits or all our running clothes.

Goggles have two basic functions, to keep the water out of our eyes and to allow us to see where we’re going. Today’s goggles, once you’ve found a style to your liking, do a great job of sealing out the water for as long as they last, so the only issue then becomes the dreaded fogging goggles syndrome. The inside of all goggles is covered with an anti-fog coating, which in time becomes coated with the minerals and chemicals from the drying pool water. This creates an imperfect surface for the water molecules to cling to, creating fog on the inside. No amount of anti-fog solution, i.e., spit, Johnson’s Baby Shampoo, etc., can cure this once it starts, so time for a new pair of goggles. Rinsing goggles off after each swim with filtered water helps, but eventually they all need replacing. It’s also best to avoid wiping the lenses too much, inside and out, as this causes scratches and accelerates the wear and tear.

Swim Suits, to generalize, come in two basic styles, those that fade and stretch a lot and those that fade and stretch less, based on the kind of material they’re made of. When you see that your swim suit no longer looks anything like the original color, be assured that it has also stretched out well past its prime and is no longer offering support in the areas that need the most support, if you know what I mean. So please take the time to occasionally check for this and replace as needed; your fellow swimmers will thank you for it!

Latex swim caps, like those given out as race caps at every triathlon, only last so long before they split and become a flat piece of rubber. For people who just throw these in the bottom of their swim bags they also become a place for mold and mildew to accumulate, so either let them dry out before storing or spend the $2 to buy new ones more frequently. A little spray bleach can also help extend the use of your favorite race cap.

Wetsuits, the big-ticket item on this list, slowly but surely acquire little fingernail cuts and digs from pulling them on and off, cuts from stepping on them in T1 to get your legs out, and splits at the glued seams. The latest and greatest wetsuits are also much softer than their predecessors, containing a higher percentage of air imbedded in them, great for more flotation, but which also makes them more prone to cuts. With some care they last a long time, but frequent use can wear them out within 1-2 years. You can buy wetsuit glue (basically Contact Cement), to repair smaller cuts and most manufacturers will repair wetsuits for free (DeSoto) or for a small fee, not including S&H. It has been my experience that blowing out the seams of a wetsuit seems to happen just before a big race, no matter how much attention I pay to them, so beware and maybe keep your old but still functional wetsuit in the garage just in case.

Tires should be checked on a regular basis for cuts, especially before your longer rides or like my friend, before a high-speed descent. Sans any signs of obvious cuts, rear tires wear out much sooner than the fronts, so when a tire shows squared off edges it’s time for a new set. And yes, I tend to replace them as sets, saving the fronts as backups to replace a tire that gets cut before it’s time, realizing that old tires are less supple and sticky compared to new rubber. Safety should be at the top of the list of reasons to replace our tires, as their miniscule contact patches are all that keeps our barely latex covered body from a severe case of road rash. I also replace my tubes with every set of new tires, thinking along the same lines of safety first, cost second. I do patch and reuse tubes though, while others refuse to do so, but I’ve never had an issue with a patched tube suddenly loosing air. I know people who Superglue cuts in their tires or patch them from the inside, but this only last so long before the cut reopens or the soft patch on the inside allows the tube under high pressure to develop a slow leak, something you don’t want to encounter while heading through a high-speed downhill corner at 30+ MPH!

A bike’s drive train, the chain, chain rings, and cassette, start wearing out as soon as you start pedaling. Eventually the chain stretches to a point that you will notice the effect with less than ideal shifts. If you ignore these signs (I seem guilty of this for some reason!), the chain rings will morph into a shape that resembles a shark fin versus a nice triangle, the same with the rear cassette. If you actually pay attention to your chain, lube it frequently, clean it after rides in the wet to remove the sand and grit, you should be able to get two chains to one set of chain rings and cassette. Your local bike shop has a tool that measures the stretch of a chain and they’ll gladly check them for free.

If you go in for an annual tune up the drive train is something they automatically check, as well as all the other wear items on the bike, like the cables, pivot points on the shifters (a moot point with the new electronic shift packages, one advantage), and those on the brakes too, as well as lubricating and adjusting them as needed.

Bike helmets also have an “expiration date” if you like, where the padding in the top starts to break down and disintegrate, telling you it’s about time for a replacement. If you’re crashed your bike and hit your helmet it’s also time for a replacement, as the hard density foam they’re made of is designed to absorb one really big hit before it loses the ability to do so. You might not notice the difference, but it is your head and brain we’re talking about here. If you think spending $100-$250 is unnecessary if the helmet doesn’t show signs of obvious cracking, do you really want to risk protecting your head in case of another crash?

Bike shorts, made of similar material to the aforementioned swim suits, suffer the same indignities of color fade and stretch. Our local SB Tri Club bike shorts had a very shear panel in the back, which over time became a little too revealing. If you’re following a friend and you’re seeing too much of them, please do everyone in the peloton a favor and suggest they purchase a new pair!

In this day of more and more electronic gear, don’t forget that your bike computer, heart rate monitor watch (the non-rechargeable kinds), HRM chest strap, and power meter all have batteries that wear out, typically without notice. Keep a supply of the necessary batteries on hand (the number 2032 comes to mind), and in your race transition bag, just in case. Nothing can be more upsetting then not having the information you’re used to training with unavailable on the day of your big race, so be prepared.

Running shoes are one of the highest rate wear items we triathletes own, yet many people seem to think that unless they’re toes are actually hanging out of the shoes they’re good to go. The general rule of thumb is that shoes last 250-500 miles, but of course your individual mileage will vary based on the type of shoe you run in, your running style and body biomechanics. If your shoes are showing excessive wear on either side or you’re down to a different color on the tread, having worn through the top color, its past time to replace them.

Realize that the soles of running shoes are made up mostly of some kind of foam-blown polyurethane, in different densities, which breaks down over time and with extended use. Even a pair of running shoes sitting in a closet for a couple of years has starting breaking down, without ever having taken one step, so don’t stock up on your favorite pair that’s going out of production, thinking you’ll have a lifetime supply. For people who run long on back-to-back days, it’s best to have more than one pair of shoes to rotate them, to allow each pair a day or so to “recover”, for the foam to essentially bounce back some from the pounding they take during each run.

Pure runners not only have more than one pair of shoes but they might also have 2-3 different styles of shoes, each suited for either running on the road, on the track (lighter and faster), or for trails. Keep this in mind if you run on many different types of terrain, variety can be your friend, saving your body the wear and tear of too much pounding from over-used, worn out, or just the wrong type of running shoe for the terrain.

In the end, all the above mentioned items seem to last for quite some time, so all it takes to ensure that you complete your next workout without equipment issues is to pay a little attention to each piece and you should be on your way to becoming a better athlete.

Thanks for the suggestion Mike, I hope this answered all your questions.