Years ago at the last Santa Barbara Triathlon Club meeting of the year, as we headed into the off-season, I asked a local physical therapist, Dr. Geoffrey Gray, to talk about the more common injuries he has seen, how we can try to avoid them, and how to deal with them before the start of the next season. I had trained with Geoff and had also seen him professionally to deal with multiple physical issues and had expected him to talk about strained hip flexors and hamstrings, over-tight quads and glutes, plantar fasciitis, Achilles tendonitis, and the like, so his opening statement was quite a surprise. He pretty much came out and said that the best way to avoid injuries is for us to stop training! After the initial shock of what he just said passed over us and the wheels began to turn in our heads, he went on to explain what he meant, as he probably saw the looks of disbelief on our faces. 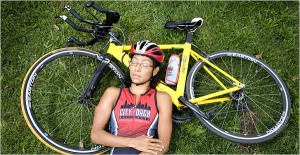 I mean think about it, here’s a group of A-type athletes at or near the end of their racing season and this guy, accredited as he may be, is telling us to stop training? The questions we all had like, what’s going to happen to all my hard earned fitness? Or how can I do that while my competitors are still out training hard and getting faster? And for a lot of us, I’m old, if I stop training I’ll never regain the fitness that I lose when I stop? Geoff calmed us all down and explained.

What he meant is that we need to stop our “focused” training after working hard for the better part of the past 9-12 months or longer on peaking for our “A” races for the year. Those of us that are hard wired to follow a periodized training plan, building up and up and up to peak for multiple races, are in effect just adding more and more stress to our bodies in the hope that they respond by rebuilding what we’re tearing down and rebuilding it stronger, so we can go longer, harder, and faster. Geoff reminded us that the majority of people he sees during the year, as he looked out on the audience and saw many of his patients, came to him after pushing themselves just a bit beyond the breaking point. The idea of backing off the “focused” training and going into a 4-6 week “unfocused” period of training was what he was suggesting.

You could hear the sigh of relief from everyone, still a little worried about the concept of “unfocused” training, but happy to hear that they could in fact continue training in some way. What would people do with their time and energy if they didn’t have something to do, right? 🙂

Geoff ran through a list of ideas to change things up in the routines that we had likely been following for quite some time, such as:

You get the idea? Un-focused doesn’t have to mean stopping, going cold-turkey without any kind of activity; it means doing something different to help your body and mind relax before you start ramping up again for the next season.

And to answer the one question we all had on our minds about our competitors who would still be out training, Geoff just looked at us and said not to worry, at some point they’ll all be coming in to visit him or someone like him with an injury based on not taking a break, while we would be refreshed, reinvigorated, and ready to resume our training again.

Geoff also suggested that while we were taking this little break, now was the time to address any physical issues or injuries we were dealing with, think about heading back into the gym/garage/playground for some strength training (that we probably stopped doing at some point in the season, slight dig there!), or taking a yoga class, or getting back into our stretching routine. Once we removed the intensity and focus in our weekly training schedule, we would be opening up the time to resume these activities, with the added benefit of increasing our strength and flexibility, which Geoff reminded us was one of the main reasons we become injured in the first place, over-use and muscular imbalances that caused other muscles to take up the work that these tired and strained muscles were no longer able to perform.

I have to say that for me, being in peak training shape at the time, training for a marathon in preparation for an Ironman race the following year, the idea of stepping back was somewhat daunting, but as I was dealing with a strained hip flexor at the time, the logic made perfect sense. I was an injured athlete, so before I started training hard for next season I would be well advised to get healthy and strong to support the months of hard training ahead.

The chatter about the idea of un-focused training lasted for weeks. Till this day I have to constantly remind people about it, probably having written a similar article multiple times since then. Good ideas need to be presented in a fresh light so that people will embrace them.

I hope there’s a light popping up over your heads right now and that you’re thinking about how you can unwind and get back to enjoying a lighter training schedule for a while. Take some time off for yourself while you can, as before you know it the first day of next season’s training will be here.

Note: Dr. Geoffrey A. Gray is currently the founder and Head of Research of Heeluxe, a Goleta, CA firm that includes a private science center for footwear research. Geoff was previously a partner and physical therapist at another local firm, Elite Performance & Rehabilitation Center.